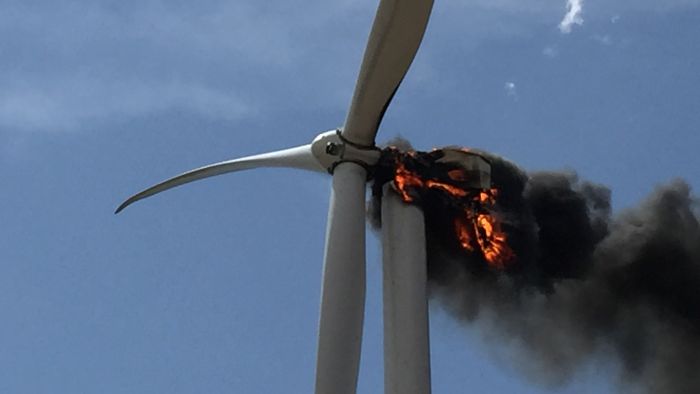 The Caithness Windfarm Information Forum (CWIF) reported 20 wind turbine fires worldwide in 2011 and 2012. This corresponds to a total of 160 accidents involving wind turbines. Therefore, fires accounted for 12.5% of all incidents in both years.

91% of all fires are not reported!

In 2011 an estimated 200,000 wind turbines were operated worldwide. Based on the data in the IAFSS report, we can assume that there were 117 fires (both reported and unreported) in the same year. This means that in 2011, 1 out of 1,710 turbines caught fire.

Overall, the data show that fires in wind turbines occur relatively rarely. However, a single wind turbine fire can be very expensive for a wind farm. A turbine quickly costs over $1 million and generates $1,500 to $2,000 in revenue per day. Offshore turbines that are larger and more complex can be up to three times as expensive, but they also generate more revenue.

With “predictive analytics” from twingz, the permanent monitoring of plant and stress conditions, operators are able to detect critical developments early enough to prevent the possibility of unfortunate damage. In this context, reliability-oriented maintenance is particularly worth mentioning.

We look forward to hearing from you!

The twingz team wishes you many new insights.